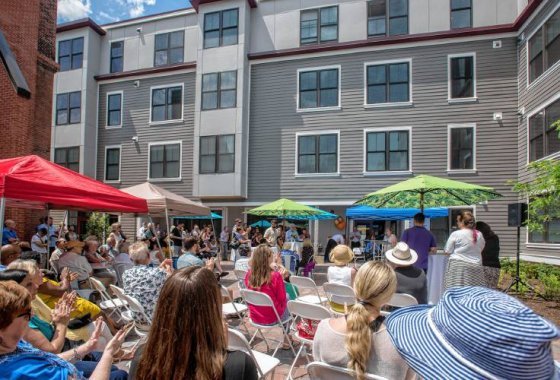 Valley Community Development Corporation Executive Director Joanne Campbell speaks to over 100 people gathered in the courtyard of The Lumber Yard, a new 55-unit complex of affordable apartments on Pleasant Street in Northampton, for an open house on Friday, June 28, 2019.

The project itself, developed by the Valley Community Development Corporation alongside Wayfinders LLC, which is in charge of property management for the site, is already up and running. On the day of the celebration, 40 of its 55 units were already occupied, with people moving into 12 of the other units that same day. The remaining three units will be moved into before June 30, said Valley CDC Executive Director Joanne Campbell.

“This place will be packed,” Campbell said.

“This is really a great day for the city,” Narkewicz said.

Narkewicz noted that the city had put money into the project in the form of Community Preservation Act funds and Community Development Block Act funds. It also worked with Valley CDC on the nonprofit’s successful application for a MassWorks grant that allowed a 19th-century storm sewer discovered during construction to be moved. The grant also paid for streetscape improvements on Pleasant Street.

“We put our money where our mouth is,” the mayor said.

Narkewicz also thanked the LaBarge family, which sold the property to Valley CDC and who were the longtime owners of Northampton Lumber Co., which was formerly located on the site.

Gail LaBarge and her son Michael White attended the event and were greeted with applause when acknowledged by Campbell.

On seeing the project completed, LaBarge told The Gazette, “It’s what really needed to happen.”

Preferences for the homeless and those at risk for homelessness apply to six of the apartments.

Janelle Chan, Massachusetts Undersecretary of Housing and Community Development, attended the event and praised the development for being all affordable housing. She said she wished that were true “for all of our projects.”

Citations from the state Senate were also presented to Valley CDC and Wayfinders by Sam Hopper, a staffer in the office of Sen. Jo Comerford, D-Northampton.

After the speakers, attendees were able to see some of the units, some of which were inhabited or being moved into.

Vionette Vazquez, 66, began moving into her one-bedroom unit on Friday. A grandmother and a retired state worker, she previously was living in Hatfield.

“This is the perfect place. The perfect size,” Vazquez said.

Germaris Pinero, 30, moved into her three-bedroom unit with her children Alondra, 16, Ethan, 13, and Liam, 2 two weeks ago. Previously, they were staying in her parent’s basement in Springfield.

Pinero moved to the Springfield area when she was 16 from Puerto Rico and has been in the area ever since. She works as a support specialist at a shelter.

Ethan and Alondra both said they liked the space.

“Having everything so close me,” said Alondra, when asked about her favorite thing about living in the downtown. “Everyone’s so polite here and so welcoming. I love that.”

Iris Rodriguez moved into her two-bedroom apartment at The Lumber Yard with her sons Angel, 15, and Gabrielle, 10, on June 1 from Holyoke. She said her kids love living in Northampton.

Rodriguez grew up in the Bronx and lived in Holyoke for 14 years before moving to The Lumber Yard. She works in Holyoke as a bus monitor, and she said the parking and commute both work for her.

“I am thrilled to be here,” said Rodriguez, noting that she had often visited Northampton when she lived in Holyoke. “We made it. We’re here now.”

Although the development is officially pet-free, exceptions can be granted.

One such exception was granted to Edna, the emotional support cat for Michael, 54, and Lynne Banks, 49, in the process of moving into their apartment on the fourth floor on Friday.

The couple previously lived in Westfield, and Michael Banks said it was a dream for them to be able to to move to Northampton, which previously had been unaffordable.