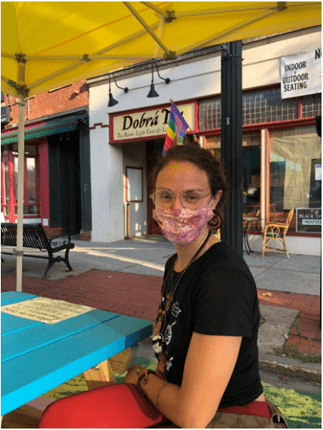 Entering Dobrá Tea, you will be transported into a new atmosphere far away from the stresses of your everyday life. You are immediately surrounded by authentic, beautiful décor from faraway places of Morocco, Asia, and the Middle East.  You will be introduced and educated by your devotee (owner or employee) in the fine art of handmade teas imported from distant countries.  Your devotee has undergone extensive training on the history, science, and nuances of all the teas, memorized the menu, to be your very own tea steward!  Pay attention to your devotee as they describe your tea choices; over 100 different varieties of high-quality loose-leaf teas.

How did Dobrá Tea, the Czech Republic based bohemian style tea house, find its way to Northampton, MA?

The story begins.  While attending college, Joel and Alli met and connected over their love of tea visiting Dobrá Tea in Burlington, VT.  They dated, graduated, married and in 2007 begin a life traveling both in the U.S. and to China, pursuing their love and passion for tea, working in teahouses, immersing themselves in the history, culture, science of making excellent tea.  After China, Alli decided to pursue a career in tea!

In 2011, Alli’s passion led them to Portland, Maine where she was hired as an employee of a brand-new Dobrá Tea house.  Here, Alli and Joel spent two years working and learning about the tea business in Portland and the other Dobrá tearooms scattered around the world.

In 2013, Alli and Joel opened their Dobrá Tea house in Northampton.  The seventh in the country!

On March 15, 2020, the day Alli returned from a three-week tea journey in Sri Lanka, she returned to the COVID 19 pandemic.  On this day, Alli and Joel closed Dobrá Tea. Alli came back from her travels refreshed, energized, and physically and psychologically ready for the challenge she was about to face.  The immediate financial impact of COVID 19 was devastating, almost no revenue from March 15th through March 30th.  She had thirteen employees on her payroll that were not allowed to come to work.  Alli and Joel could only process loose leaf tea sales by email.  They did not have the computer technology to facilitate high sales of tea.

Thanks to the support of Valley Community Development Corporation, Alli was able to apply for a Northampton Emergency Small Business Grant in early Spring.  She was awarded the funding that allowed her to purchase loose leaf tea inventory, shipping supplies, two new laptop computers, a contactless payment system, a website upgrade, and a new front door that converted into a sales/pick-up window. Upgrading technology and introducing e-Commerce helped to shift the business from a 90% tea service model to a 50% loose leaf tea sales business.

According to Alli, “loose leaf tea sales alone will not sustain our business long term.  There is little profit in loose leaf tea sales.  We depend on the sales margin of the tea house revenue to cover our overhead expenses.  The sooner we return to full capacity in our tearoom, the more financially secure the business will be.  I invite you to Dobrá Tea house, a perfect place to meet a friend, a colleague or future friend for a safe, socially distant visit to share a pot of tea and a locally sourced vegetarian dish or dessert.”

In early July, Dobrá was allowed to open their tea house for business with limited seating.  In September, they were approved for outside seating.  A Community Revitalization grant helped them purchase picnic tables, chairs, paint, and canopies for outside tea house dining.  Even with inside and outside tea house service, Dobrá has only resumed 50% of their normal sales revenue.  According to Alli, “At least 50% of Dobrá’s tearoom sales has declined due to the loss of customers coming in to sit for tea.”

Going forward, Alli plans to continue to apply for the upcoming federally funded small business grants.  She is concerned about the winter months and the impact on her business if the COVID 19 infection rates increase.  This could cause a further decline in tea house sales, her primary business.

During this difficult time for small business owners, when asked what she is grateful for from her community of supporters, Alli says “ I am especially grateful for our customers who have stuck with us and continued to support us via loose leaf tea sales, to go teas and what little seating we now have. We would be gone if it were not for your loyalty, faith, and generosity.  I am also grateful for having the support of Valley Community Development Corporation to assist me with the grant application process of early funding that helped Dobrá Tea with the immediate cash needs of the business.” 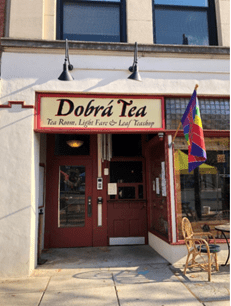